It takes players to win...but what else?

Less More
1 month 2 days ago #26194 by CorpusJayhawk
It obviously takes recruiting good players to win in college basketball. But there is also much more than just good players. And this season has shown that who the good players really are is a real crapshoot. First, let's look at the candidates for the Naismith Award and where they ranked coming out of HS. Of the 50 pre-season Naismith candidates, 19 were not ranked in the top 100 coming out of HS. Another 10 were ranked 50-100. Of the 21 ranked in the top 50, likely 8 of those will fall from the list by season end as they have been less than impressive. So certainly it is good to get highly ranked players out of HS but it is equally important to have that keen eye to identify talent that is not on the pundits radar screens as elite. Take Baylor as an example. Jared Butler was ranked 95th, Macio Teague was not ranked, Adam Flagler was not ranked, Flo Thamba was not ranked and Jonathan Tchamwa Tchatchoua was unranked. Love him or hate him, Scott Drew has done an amazing job of identifying talent. That is a real key. Think of some of KU's real coups, Frank Mason III (85th), Devonte' Graham (69th) and Svi Mykhailiuk (95th). And this season we have Ochai and Christian who were both unranked.

Rule No. 1 -- Recruit talent, but real talent not just high rating coming from HS. Have the eye to recruit to the right fit and someone who will grow and blossom.

Rule No. 2 -- Develop talent. This is where great coaching comes in, including the assistants and perhaps largely the assistants. Bring out the best in your players potential.

The second list below is a list of all teams that currently have top 100 HS players on their roster. It shows a few important aspects of success.

1. You need top HS players on your roster to succeed -- Every top 25 team (based on computer composite) has at least 1 top 100 player with the exception of BYU (24) and Minnesota (25). The average top 10 team has 5.8 top 100 HS players. So you do need these players on your team and the more the better. But that leads to the 2nd lesson.

2. You need not only top HS players, but the right HS players -- Coach K and Coach Calipari have some real explaining to as does Coach Whit at Florida , Coach Williams and North Carolina, Coach Izzo at Michigan St. and Coach Wade at LSU. There are others to lesser degrees such as Coach Hurley at Arizona St., Coach Larranaga at Miami (Fl) and Coach Hopkins at Washington. All of these coaches have been very successful at landing highly rated HS players but have not been able to yield the proportionate success on the court. Coach K has 6 top 25 recruits and 3 additional top 100 recruits on his roster but currently is ranked 73rd. There are currently 20 teams that have not a single top 100 HS player on the roster that are ranked ahead of Duke. That is mind blowing. And Kentucky is not much better. Calipari sits one spot behind Duke in 74th and has 3 top 25 and 5 additional top 100 players on the roster. Good ol' Roy is a little better but not much. He has an impressive 4 top 25 players and an additional 4 top 100 players on the roster yet he can do no better than 48th. Those 4 top 25 players is 2nd only to Duke with 6. In fact, of the 21 teams currently boasting a top 25 HS player on their roster, only 7 (Gonzaga-1, Houston-4, Villanova-6, Texas-7, Florida St.-9, Tennessee-16, USC-19) are in the top 25. Hopkins at Washington, has 1 top 25 recruit and 5 total top 100 recruits but is currently ranked 173rd.

So clearly it is a mixed bag of team success when it comes to top recruits. Some were projecting Howard to burst on the scene of elite college teams when they landed a top 25 recruit and also 2 additional top 100 recruits. But they are currently 330th, one of the very worst teams in the country. Arizona St. has a top 25 recruit, 4 additional top 100 recruits and a Naismith Award candidate who was not rated coming out of HS, yet they are ranked a dismal 100th.

Rule No. 3 -- Great coaching is indispensable -- Clearly Coach K is a great coach so his lack of success is probably based more on bad chemistry and HS school rankings that were overrated. But one could (and some have) that his assistant coach ranks have been depleted and he has a less than stellar current crop of assistants. Roy, OTOH, is also a great coach and still has some of his key assistants. So it seems he has just recruited false talent or the chemistry is bad.

So where does that leave Bill Self? Kansas currently has 5 top 100 players and zero top 25 players. Our highest rated player, Bryce Thompson, has been hurt over the recent slide. That is a bigger loss than many think. But there are still teams that have as little talent, in terms of HS rank, who are doing better. You can argue that Self has still done a reasonably nice job of identifying talent, with Christian Braun and Ochai Agbaji unranked yet performing well. So recruiting-wise, the clear thing you can say about KU's current roster is we lack a stud, a bona fide top 25 recruit. We also lack depth of talent. Look at the bottom table. In Self's 1st 17 seasons at Kansas, he averaged having 2.64 top 25 players and 8.3 top 100 players. In fact, this is the first roster at Kansas under Self without a top 25 HS player on the roster. It is also the 1st roster under Self with fewer than 6 top 100 players. The second worst roster in terms of number of HS ranked recruits was last season. But we did have 2 studs, Dotson (20th) and Azubuike (33rd). So is the NCAA affecting recruiting or has the landscape shifted or has Self and or the assistants lost their touch?

So Self has some talent, but we are down from where we have been and where we should be. Way down. Chalk a lot of that up to the NCAA cloud. Obviously lack of talent is a huge factor to our current state of relative mediocrity. But as I said in a previous post, what about getting more out of the talent we have? Ochai has progressed nicely. Marcus seems to have progressed up until this year and his woes may very well be that he is out of position. But what about David? David does not seem to me to be any better than he was as a freshman. And De Sousa did not seem to improve. Azubuike obviously was a super-stud hi senior season, but how much of that was conditioning and body mass change. And what of Cliff Alexander, Chieck Diallo and Carlton Bragg, One could argue that KU has been buoyed by great guard and wing players and development and almost dragged down by subpar front-court players and development. That is of course, Udoka not withstanding. Well, this season, David has not developed and we simply do not have the guard and wing talent depth to compete at an elite level. We are not bad, but we are not elite.

So what do we need to do to fix recruiting and to get better bigs and develop them more effectively? 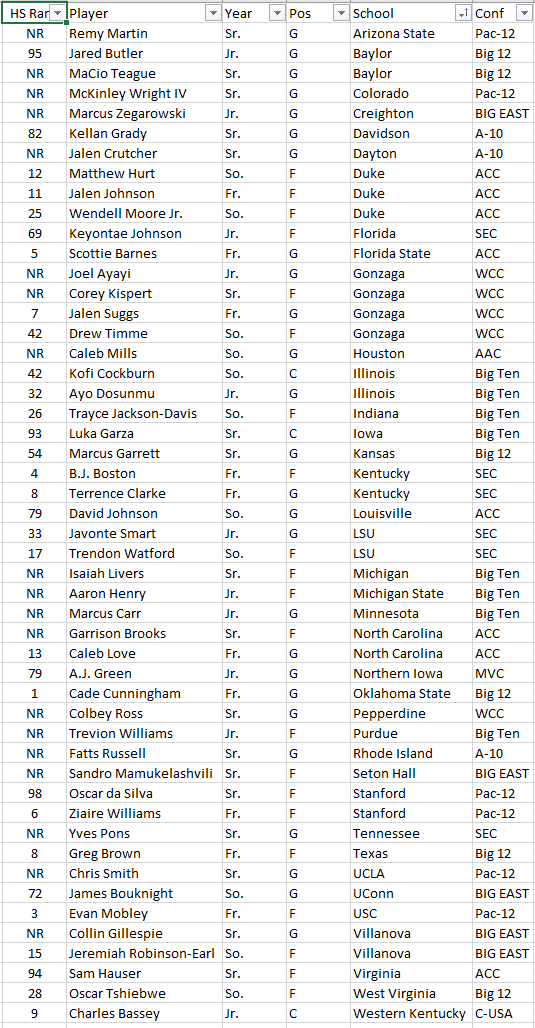 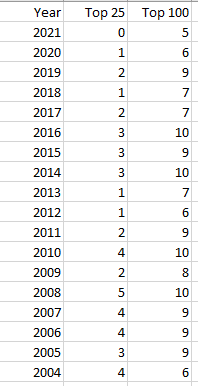 Less More
1 month 2 days ago #26198 by HawkErrant
I think our coaching bench has been significantly weakened with the departures of Joe Dooley and Danny Manning.

As I understand it Joe was the game planner and almost always had the guys ready for the next opponent. This season for sure we have not look prepared.

I don't know who we have developing bigs now, but I look at David's natural talent and think "what would he be like with Danny teaching him the tricks of the trade?"

I know it will almost certainly NOT happen, but if there is *any* way Bill can get Danny back as an assistant next season, I would be so happy.

Any more talk to the idea of sacrificing Kurtis Townsend to the NCAA gods?
I'm not for it, just wondering if it is still making the rounds.

Less More
1 month 2 days ago #26201 by CorpusJayhawk
Today, Darnell Jackson was on the JHawk (Jeff Hawkins) podcast. He gave an absolutely huge shout out to the role Danny Manning played in his development and the entire team. Losing Danny was a huge blow. He also spoke a little about Joe Dooley and Tim Jankovich. Both were strong assistants who were excellent at player development. I admit, this is an area I know little about and defer to former players input as in this case.

But all that aside the more I look at this the more it seems the biggest culprit is simply lack of talent. I mean the depth of talent we are used to. I developed a scoring system rosters. It is based solely on HS recruiting rank. I gave every player a score of 250-HS rank. So the No. 1 HS player n a class had a score of 250. The 100the player had a score of 151. Then I increased that score 15% for every year of experience. So obviously this is not a perfect system but it used the data I had. The result is the graph below. You can see the result is stark. This season's roster is BY FAR the least heralded roster under Self. I mean it is not even close to the tune of about half the usual score. You can see the previous low was 2009 which is to be expected after the mass exodus. The other thing that jumps out is the incredible roster management Self has had. Other than 2008 which was a crazy good year and 2009 which was after the exodus, the score has been very consistent between 3247 and 3550. That is amazing consistency. But this season it is decimated. We simply do not have the firepower of past seasons. 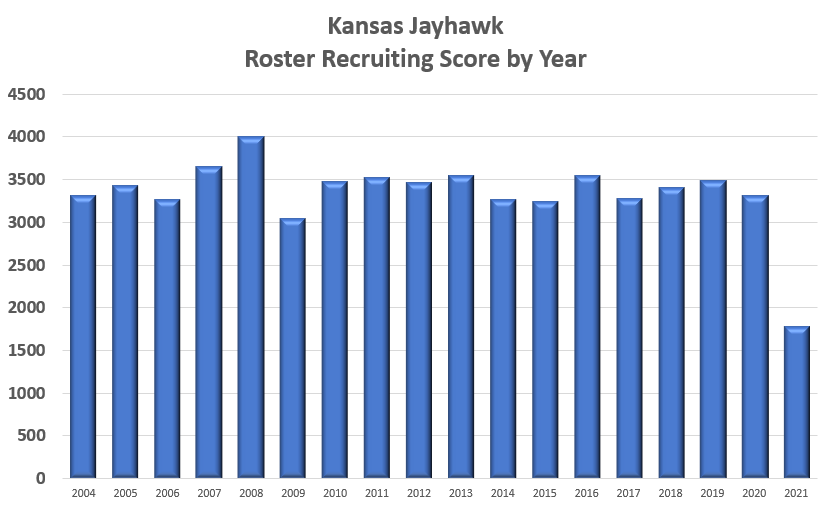